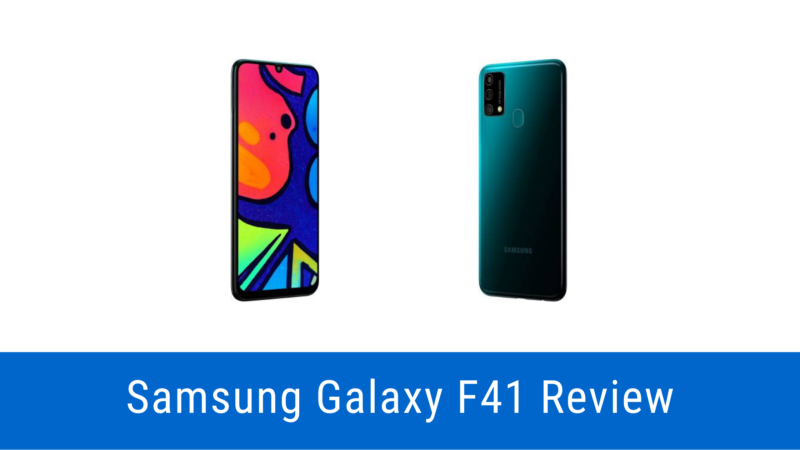 In the same way, the new ‘F’ series might target the young generation in our country. Nevertheless, as a customer, you’re thinking – ‘Should I keep this phone in my wish list?’ Read this review to find out!

While writing this review, I was quickly reminded of Samsung Galaxy M31. In fact, the main specifications, which the majority of customers consider are similar in both phones.

There are some differences though. For instance, the rear camera configuration is different. Furthermore, the display of F41 is a distinguished parameter. Despite the similarities and minor differences to M31, the Samsung Galaxy F41 is a new smartphone. Thus, it is interesting to delve deeper into the overall package.

First and foremost, the Galaxy F41 looks similar to Galaxy M31. The overall dimensions of this phone are ergonomic. Furthermore, the display shape does not have a punch hole. Instead, it has Samsung’s famous Infinity-U shape.

Therefore, the overall front design of F41 is nothing new, but at the same time, it is impressive. Now, the rear portion consists of a fingerprint sensor and of course, the rear camera setup.

The triple rear camera setup is neatly arranged in a rounded rectangle unit. Hence, this Samsung galaxy smartphone definitely looks posh. The edges are round in shape. Finally, the fingerprint sensor is located a tad higher on the back panel. Nevertheless, regular users won’t feel it difficult to locate.

Colours are an important aspect of any smartphone design. The Galaxy F41 is available in fusion black, fusion blue and fusion green colours. The colours look glossy. Hence, you can pick any preferred colour.

At this time, most Samsung smartphones come with the Exynos series processors. Similarly, the F41 runs on Exynos 9611 which can be found in many Samsung devices. Here’s the bottom line – Hardcore gamers prefer Qualcomm processors. On the contrary, the Exynos is capable of handling all crucial requirements of regular users.

Nevertheless, you can still play games on the F41. Regular customers who use management apps, social networking apps, generic apps, etc. will find the Exynos 9611 convenient. Therefore, if you aren’t bothered with the absence of a Qualcomm processor, the F41 won’t disappoint.

In terms of hardware, there’s a USB type C port in F41.

Thus, there is absolutely no doubt about the display quality. To sum up, the display is clear, invigorating and snappy. So, you can play games and watch videos without getting bored.

Firstly, the F41 has a triple rear camera setup. The details of this configuration are as follows:

It is important to realize that almost all smartphones from one manufacturer under the ₹ 20K mark have similar camera performance. Accordingly, the F41 captures good daylight images. On the contrary, images taken in low light have slight noise.

In reality, regular customers do not complain about the noise generated in low light. Therefore, the Galaxy F41 is a capable camera smartphone.

At this time, this budget Samsung galaxy smartphone runs on Android 10. Of course, Samsung provides its custom One UI skin. The user interface runs on One UI core 2.1.

This UI is simple but contains some bloatware. Hence, if you do not use some apps, get ready to uninstall them.

In conclusion, the UI and software performance is similar to all Samsung budget smartphones. Some Samsung apps like Samsung Notes, Gallery, Samsung Pay, etc. are more than handy applications. Altogether, the One UI is definitely more refined than Samsung’s Experience UX.

WHAT IS THE X-FACTOR IN THIS PHONE?

Samsung has released many smartphones this year. Some notable phones include the Galaxy Note 20 ultra, Galaxy M31, Galaxy M01s, Galaxy S20, Galaxy A51, etc. While the Galaxy F41 isn’t a flagship phone, it delivers an all-round performance.

Therefore, the X-factor of Galaxy F41 is a mixture of certain specifications. For instance, the 6000 mAh battery is a good value for your money. The full HD super AMOLED display is a satiating inclusion. Furthermore, the overall design of this smartphone is aesthetically pleasing.

On the whole, ‘value for money’ can be the X-factor of this smartphone. It can be an interesting point to assess its performance over a long period of usage. But, the specifications at the approximate price range of ₹ 15K to ₹ 17K serve as a good package.

The Galaxy F41 is almost a replica of Galaxy M31. You won’t notice any major differences apart from the rear camera setup. Nevertheless, the ‘F’ series is a recently launched venture of Samsung. Hence, from a customer perspective, the F41 delivers great balance and value for money. Therefore, you can certainly try this latest phone from a highly reputed brand like Samsung.